admin
Legendary Pictures’ Krampus, a darkly festive tale of a yuletide ghoul, reveals an irreverently twisted side to the holiday. The horror-comedy tells the story of young Max (Emjay Anthony), who turns his back on Christmas as his dysfunctional family comes together and comically clashes over the holidays.
When they accidentally unleash the wrath of Krampus—an ancient entity from European folklore—all hell breaks loose and beloved holiday icons take on a monstrous life of their own. Now, the fractured family is forced to unite if they hope to survive.
Krampus and his mischievous underlings are being created by the combined efforts of Weta Workshop and Weta Digital, both renowned for their epic work on The Lord of the Rings and The Hobbit trilogies and King Kong, among many others.
Written and directed by Michael Dougherty (Trick ’r Treat), Krampus is co-written by Zach Shields and Todd Casey and produced by Legendary’s Thomas Tull and Jon Jashni, Alex Garcia and Dougherty. The film will be released by Universal Pictures.
SUBSCRIBE:
FOLLOW US:
LIKE US:
Check out Movie Behind the Scenes, Interviews, Movie Red Carpet Premieres, Broll and more from ScreenSlam.com
Part of the Maker Studios 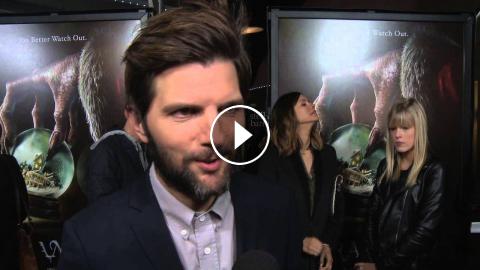 Legendary Pictures’ Krampus, a darkly festive tale of a yuletide ghoul, reveals an irreverently twisted side to the holiday. The horror-comedy tells t...